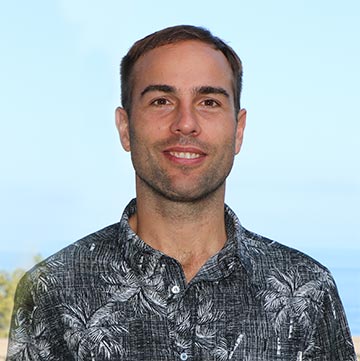 Dr. Jon Lopez joined the staff as a quantitative fisheries scientist in 2018. Since 2022, Jon takes the role of Head of Ecosystem and Bycatch Program which is mainly responsible for the scientific research to support the implementation of the broad ecosystem goals of the Antigua Convention. Besides his supervisory roles of the Ecosystem and Bycatch Program, much of Jon’s current research focuses on investigating the impacts of anthropogenic activities and environmental variability on marine biodiversity and fishery resources, and developing and testing alternative mitigation, conservation and management measures that promote the sustainable use of ecosystems, including target and non-target species and sensitive habitats. With a strong background in the ecology and behavior of large pelagic species, especially in the FAD fishery, Jon’s research evolved to investigate and mitigate the impacts of the different fishery components. He has also been working closely with fishermen in all three world’s oceans, including skipper workshops and the development of code of good fishing practices. He has contributed to a number of working groups of different tuna regional fisheries management organizations (t-RFMO), including the Ecosystem and Bycatch, Tropical Tunas and FAD working groups of the International Commission for the Conservation of Atlantic Tuna (ICCAT) and the Indian Ocean Tuna Commission (IOTC), and is now focused in the eastern Pacific Ocean. He is also a member of the joint t-RFMO FAD technical working group, the Seasonal Forecasting and Dynamic Ocean Management Task Team of CLIOTOP, and is a founder member of IMECaN, the Early Career Researchers network of IMBeR (Integrated Marine Biosphere Research).